Anyway you look at it, the parking lot of Lockwood School is a long way from Indianapolis, Le Mans or Daytona. But on one recent Sunday, it was close enough to give a couple of dozen amateur racers a taste of far bigger racing venues. One by one, racers — men and women, the young and the less young — took off with tires screeching and engines roaring around a course marked by orange traffic cones.

Navigating through a course strewn with turns and slalom and figure-eight patterns, many racers topped speeds of 40 to 45 miles an hour and made it around the parking-lot track twice in a minute or less. If, to the uninitiated, parking-lot auto racing seems improbable, the thrills are genuine, aficionados say. It s a tremendous adrenaline rush, said Dennis McCollough, who ran the Lockwood course in 48.745 seconds, the second-best time for the day of all racers.

Called auto cross, it s the most basic, grassroots form of organized car racing. This type of auto cross is Solo II, in which vehicles run one at a time against the clock. Any type of vehicle can be used as long as it meets safety requirements. Entry fees are low, and drivers don t need previous experience or training. The vehicles lining up for their turn on the track formed an odd parade. Everything from a go-kart powered by a lawnmower engine to regular street cars to bona fide race cars was represented. Firebirds, Hondas, Mustangs, Corvettes, Datsuns, Camaros, MG midgets, VW Rabbits and Subaru Story Discussion Font Size: find out more The Yellowstone Region of the Sports Car Club of America has about 100 members, most of whom live in Billings Bozeman and Idaho.

For information type of auto cross is Solo II, in which vehicles run one at a time against the clock. Any type of vehicle can be used as long as it meets safety requirements. Entry fees are low, and drivers don t need previous experience or training. The vehicles lining up for their turn on the track formed an odd parade. Everything from a go-kart powered by a lawnmower engine to regular street cars to bona fide race cars was represented.

Firebirds, Hondas, Mustangs, Corvettes, Datsuns, Camaros, MG midgets, VW Rabbits and Subaru Imprezas all have raced. We even had a pickup truck one time because the driver didn t have any other vehicle to race, said Char Schulz, who along with her husband, Kurt, helped found the Yellowstone Region of the Sports Car Club of America in 1986. The group sponsors Solo II races from April into September, with events every two to three weeks in Billings or Bozeman.

Char used to race, and Kurt still does in a bright yellow Volkswagen Cabriolet convertible. SCCA racing vehicles fall into classifications based on how much they have been modified from the way they rolled off the assembly line. Others have been built from the ground up as race cars. A wide range of drivers complements the variety of racing vehicles. Mark Brown of Red Lodge was a novice racer when he brought his 125cc shifter racing kart to the Lockwood School. He had purchased his kart on the Internet a few months before and had driven it only in a few test runs before coming to the race. The vehicle has a 6-speed transmission and can go from zero to 60 miles an hour in 3 seconds, with a top speed of 120 miles an hour. Dressed in red helmet, red racing jumpsuit and red shoes, Brown cut a distinctive figure as he zipped around the course in his open-aired kart.

Billings resident Dwight Gilliland is at the other end of the spectrum with more than 30 years of racing experience. He had the top time — 46.699 seconds — of the day at Lockwood with his Formula 1-style race car that he built. His wife, Kristi, had the third-best time, with 48.820 seconds. Dwight Gilliland has been racing or working on cars since he was 13. For several years, he managed or was a member of pit crews and built race cars in several professional racing series including the Indy 500. He has won the Black Otter Hillclimb several years, including last year. Gilliland s car has the potential to be one of the fastest auto-cross vehicles in the country, Kurt Schulz said.

At 16, Alexandra Brelje is one of the youngest local Solo II racers. Her parents, Dale and Margie Brelje, started parking-lot racing to tune up for the Black Otter Hillclimb. We re big NASCAR fans, and this is as close as we can get, Dale said. Just before her turn on the Lockwood course, Alexander, wisps of red hair escaping from her racing helmet, climbed into the low-slung bucket seat of her 1-speed, 5-horsepower racing kart. As she adjusted her black driving gloves, her father pulled a lawnmower-like cord to start the engine. She s shy and timid around people, but this gives her a way to express herself, Dale said. It also should give her a sense of accomplishment. Alexandra s best time for the Lockwood race was 1 minute, 1.556 seconds.

Children as young as 8 are allowed to race 5-horsepower go-karts in Solo II events. Many racers blend work and play in the automotive field.

Kurt Schulz owns Billings Foreign Car Service, and Dennis McCollough has Mini Motors. Others pursue professions as far from a combustible engine as possible. Ken Decker, who started racing with the club three years ago, makes oboes and repairs wind instruments. The maroon Mustang GT that he races is his every-day car. The only modification he has made is strengthening the suspension. Before a race, he also changes the tires to a softer racing tire and adjusts the car s alignment.

Solo II is one of the safest ways to race, participants said. The time-trial form of racing means only one car is on the course at a time, which eliminates dangerous vehicle-to-vehicle crashes. Usually, the only thing that gets hit during races is a plastic pylon. Far less frequently, every few seasons or so, the concrete base of a parking-lot light is bumped. Racers could only recall one time in recent years that someone turned a car on its side. Cars are checked before each race to make certain vehicles are working properly. You can show up in an old beater as long as it s safe, Kurt Schulz said. Racers also must wear helmets and have seatbelts fastened. Races have several safety stewards who have gone through training and supervise the race. In each race, drivers divide into two groups. One group spreads out over the course to spot gates, reset tipped cones (for each pylon tipped over, drivers receive a 2-second penalty) and supervise electronic timing. After one set of drivers has raced three times, they assume track duties, and the other set of drivers races.

Marty Westland of Bozeman, who has been racing for seven years, thinks Solo II racing is more than an afternoon of fun. Drivers take the skill of handling a car in tight situations with them when they return to public streets and highways.  You learn something here you don t learn in driver s ed, Westland said.  You learn how to handle a car at the limit.

Solo II races take place at both smaller and larger courses than the Lockwood School. Skyview High School s lot is much bigger and will be used for the last Billings race this summer, on Sept. 3. Albertson s parking lot in Billings Heights is smaller. The group also has raced at Billings West High School, Rimrock Mall, Lowe s and Wal-Mart. 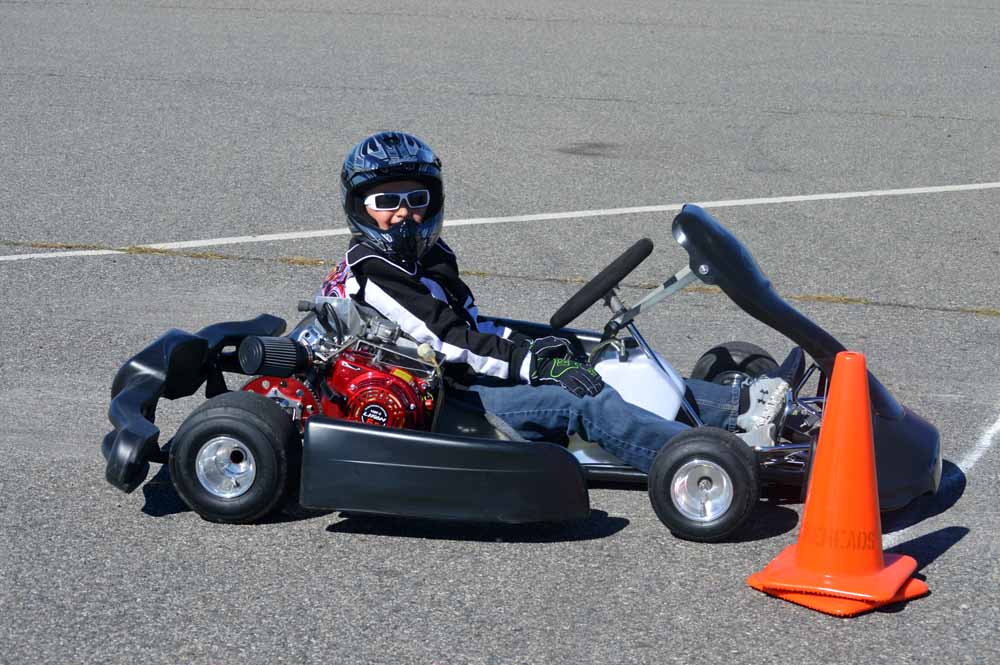