“When you get there, find the guy with the biggest hat, tell him that you’ve never autocrossed before, and then do what he says.”

(Author anonymous, but the more you participate in this sport, the more accurate you will find the quote to be!)

DRIVING AROUND A PARKING LOT HAS NEVER BEEN SO MUCH FUN!

Sometimes called autocross, a “Solo” is a timed event on a course marked by traffic cones or pylons.  It’s low in risk, and can be light on commitment (if you so choose) while being very rewarding.

The best thing about Solo is you only need three things: a valid driver’s license, a safe car, and a helmet.  By safe car, we mean one that’s not going to fall apart, posing a hazard to you or others.  A helmet means a Snell Foundation or SFI-rated helmet – check the Solo Rules for the most up-to-date requirements.  The good news is that loaner helmets are available at most events, but check with the event organizer ahead of time to be sure.

Getting started is as simple as showing up.  Most Regions have programs in place to guide newcomers at the events.  Some areas of the country even have Solo schools designed for rookies.  If you can get to one, that’s great.  If not, show up, tell them at registration that it’s your first time, and let someone guide you.

An SCCA Solo event is a precision driving competition.  You’ll find that how close you get to the cones while keeping your car at the limits of traction is much more important than how hard you mash the throttle.

The Solo course is usually assembled in a parking lot, unused airport, or other large area of pavement or concrete.  Traffic pylons – the orange rubber cones you usually see around construction zones – mark the course.  They’re soft, so there’s not likely to be any damage if you hit one.  But you still don’t want to knock one over, because that will mean two seconds added to your time.

Which brings us to our next point:  Solo is a timed event.  Runs will usually be about a minute long, and your objective is to have the lowest time in your class if you want to win.  It’s really that simple.  But while getting started is easy, mastery can be a lifelong pursuit.

Registration is filling out your entry form and paying your entry fee.  Again, let them know it’s your first time and they’ll do their best to help guide you through the process and tell you where to go from there.  But since you’re reading this, you’re going to have a pretty good idea.  Just be aware that each Region may do things a bit differently, and prices may vary.  Generally, however, $35 is the ballpark for many entry fees.

After registration comes tech inspection – if you don’t know where it is, ask at registration.  You’ll take your car to the inspection area and they’ll check a few things to help ensure your car is safe to compete – things like throttle return, the wheels are snug, tires are in good condition, the battery is properly restrained and your brakes are firm.  If they find something amiss, don’t be offended or take it personally, they’re just trying to make sure everyone is safe.

Ideally, before tech inspection comes car prep.  For now, that may mean nothing more than getting all the loose stuff out, taping numbers onto the side of your car (registration will often assign you a car  number) and adjusting tire pressures.  You’ll probably want to bump your tire pressures up from stock – find someone with a similar car to give you a recommendation on appropriate pressures, but if all else fails, make sure your tires are inflated to the auto manufacturer’s recommended pressure.  Later car prep may mean changing tires and adjusting shocks, or rolling the car off the trailer.  But let’s not get ahead of ourselves. . . .

Before the competition begins, there will usually be a drivers’ meeting.  The event master will go over the event format and cover any special rules or procedures.

Sometime prior to that, probably between tech inspection and the drivers’ meeting, you’ll walk the course.  This is critical – the course changes at every event, and because the course is not pavement against dirt or grass, but rather pavement against pavement separated by cones and a chalk line, it can be tough to see.  You’ll want to walk it as many times as possible to get familiar with it.

The competition part of the event is divided into heats.  Your class will determine in which heat you compete and in which heat you work.  Yes, working is part of your entry.  The competitors run Solo events; the people running registration, doing tech inspection, timing and setting up the course and picking up the cones that get knocked over include all competitors, just like you.  None of the work at a Solo event is hard manual labor, but it must be done to ensure a quality experience for all.  Failure to work during your assigned time usually results in disqualification from the event.

Whether you work before or after your runs (many prefer to work before so they get a better look at the course, although usually you don’t have a choice), it all leads to the fun part, the timed runs.  When it’s your turn, pull your car into the grid, and eventually you will be directed to pull up to the starting line.  From there, the starters will tell you when to go – but it’s important to note the clock doesn’t start timing when the starter says go.  Rather, the clock starts on your run when you cross the timing lights on the course.  Once the starter says to go, take a breath and proceed when ready.  When finished with your run, drive slowly through the pit and head back to the grid.  You will have at least five minutes until your next run, but often you’ll have more.

Once all of your runs have been completed, head back to your paddock space and either prepare for your work assignment, or (if you’ve already worked) enjoy being a spectator.

YOU WILL GET BEAT

You now have the basic information for a successful first Solo weekend.  You have a car.  You’re ready to go.  There are a few more things to keep in mind, though.

The first is, Solo is a very different discipline of motorsports than you might be familiar with.  You may have been to a professional racing school or logged many hours during track days.  Those will help you, but they’re not the same as autocross.  Many a professional racing driver has been embarrassed on a Solo course because it requires different skills and a slightly different philosophy of car control.  And keep in mind that many say that going from Solo to Club Racing is usually a more successful transition than the other way around.

That’s all a way of saying that you should expect to be well off the winning times at your first event.  Don’t let that discourage you.  You’ll get there.

While Solo may meet the ideal of show up, push your car to the limit in competition and drive home, the reality is sometimes different.  If you want to compete for wins and the season titles, it’s going to take quite a bit of commitment.

Depending on the class, some people do have dedicated Solo competition vehicles – some even have dedicated competition cars in the “street” classes such as Street Touring and Street Modified.  Despite that, it’s still possible to drive a car to the event and win.  You’ll need to do a little more work, though.

The first step to committing to the sport is a second set of wheels – ideally lighter than stock – with your competition tires mounted.  If it’s a short drive, you can swap them at home the day before; if you have to driver farther to an event, you may wish to save tire changing for on-site.

A dedicated set of wheels and tires is becoming the norm for Street Touring, also.  The ideal tire, even though they may have a treadwear rating of 200, may not be one you want to drive on the street everyday.

In addition to wheels and tires, you need the things that go along with changing them – jacks, jack stands and torque wrench.  A cordless drill or impact wrench can be handy as well.  You’ll also want to bring some means of filling your tires with air at the site should you need it.

Some other things to think about bringing along are a place to sit, some protection from the sun and weather, and you’ll also want water and snacks.  Be sure to bring your family & friends! 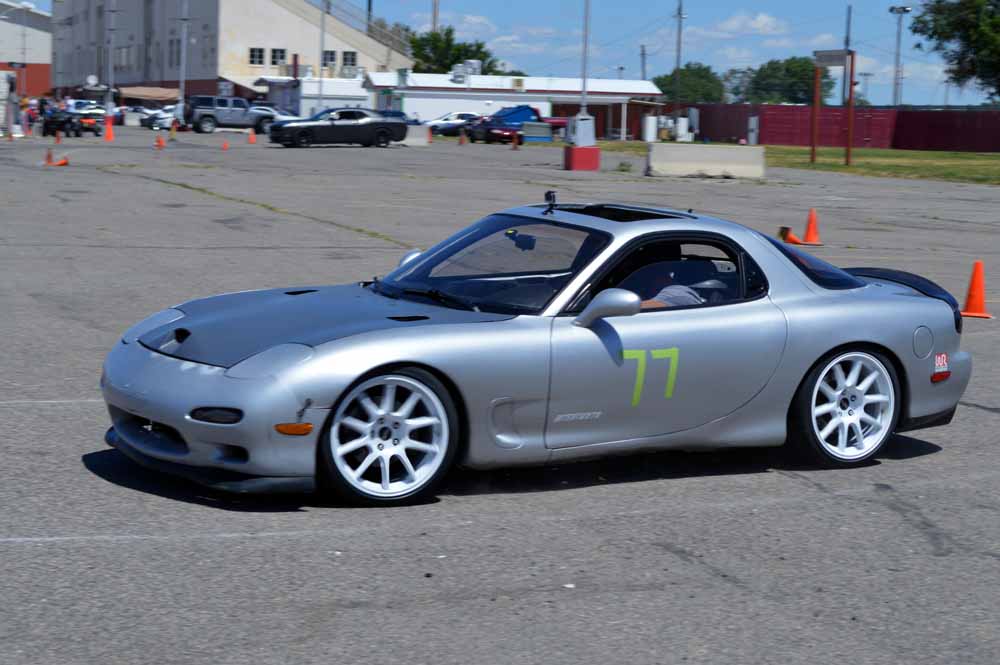