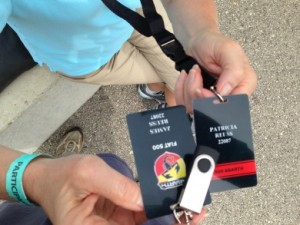 Want to learn how to really drive a Fiat Abarth?  Just buy one and use your VIN to register for the freeAbarth Track Experience at one of several professional race tracks around the country.  It’ll be the high performance drive of your life!

The Region Webmaster/Secretary-Treasurer/Newsletter Editor took me to the exclusive Autobahn Country Club in Joliet, IL, west of Chicago, to celebrate our wedding anniversary in a Fiat.  Our day-long Track Experience included driving both autocross and a road course, definitely an exhilarating experience for a novice. The Autobahn is performance car heaven with no speed limits where individual memberships can be purchased for a $35,000 initiation fee and annual dues of $4,000.  Yellowstone Region could purchase a corporate membership (4 designated members) for an initiation fee of only $112,000 and annual dues of $16,000 a great club investment!  Check out venue features atÂ http://autobahncc.com/

The upscale event began with a shuttle ride from the parking lot to the clubhouse and a spin around the ample breakfast buffet.  We drivers need to keep up our strength!  Orientation included a brief video about Karl Alberto Abarth (pronounced “Ah-Bart”), the Austrian genius who started his career designing and racing motorcycles.  A friend of Ferry Porsche, Abarth turned to car design and in 1952 built the first Abarth 1500; eventually Abarth became the racing department of Fiat.  And then we bought one. 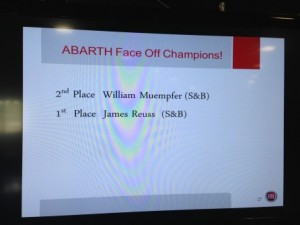 Before buckling into one of the fleet of Abarths parked curb-side, each driver got a flash drive to video every event with two in-car cameras, one facing the road and one facing the driver; a computer also tracked the car’s position on the course and the lap/time/MPH/RPM in real-time.  Of course, I’m sure we drove much faster than the telemetry indicated.

We 52 drivers were assigned to either “Team Shake & Bake” or “Team Hollywood,” so our goal was to beat the other team in two timed autocross events.  The first course gave each driver a chance to race the clock; fast time was turned in by Bobby, our S&B team leader, at just over 26 seconds.  The second figure-8 course was a head-to-head competition that pitted two drivers against each other on mirrored courses; this was definitely more exciting and challenging because of a required full stop in the middle of the run.  J won the face off competition among the Shake & Bakers.

Each event venue offered shade and snacks (again, for keeping up our strength!), welcome hospitality in the Midwest where August heat and humidity are usually oppressive though our weather was perfect. A gourmet lunch offered the chance to talk with other Abarth owners of all ages, shapes, and skill levels, and the cadre of professional drivers who coached us at each event.

During breaks from our road course work on the North Course, we watched local drivers in a various cars blast around the South Course.  We also checked out the fleet of performance cars Autobahn members can rent.  (J. was whining about taking out the Ferrari California pictured below, but I told him he could only drive yellow cars.) 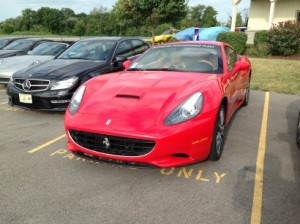 Then it was our turn to hit the North Course, a 1.46 mile circuit with 9 turns (6 right + 3 left), marked with braking, turn, and apex cones.  We put on helmets and jumped into an Abarth where a professional driver was already in the passenger seat, waiting to coach us through the course. We plugged in the flash drive and hit the track.  It was AWESOME, and I could definitely give up my day job to just go FAST.

Each driver had seven turns to drive the 2 laps of the course before pulling into pit lane and waiting while others drove with ourcoach.  Initially, we were limited to 3rd gear; as we learned the track in successive drives, we could use all gears, as fast as we wanted to go.  With each drive, our coach had less advice for me as I began to figure out what those cones really meant; I finally conceded that he might be right about how to get around the course, braking strategically and using the full 40 feet of track width. 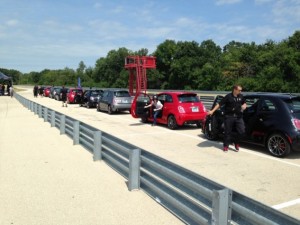 The last event of the day was our ride-along with a professional driver at the wheel who showed us what an Abarth can do on the road course when it’s driven by someone who drives for a living.  But just like at our local events, being a passenger is much less fun than being a driver so I would have given up that hot lap for lots more of my own.

Remarkably, with no racing modifications, the Abarth stood up to every driver’s skill, from those of us who had no experience to hard-core seasoned drivers.  Want to elevate your heart rate and learn about driving a great car FAST?  Drive the Abarth Track Experience! 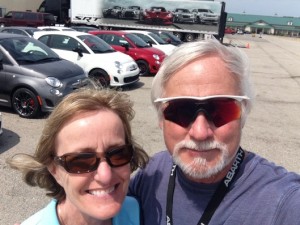 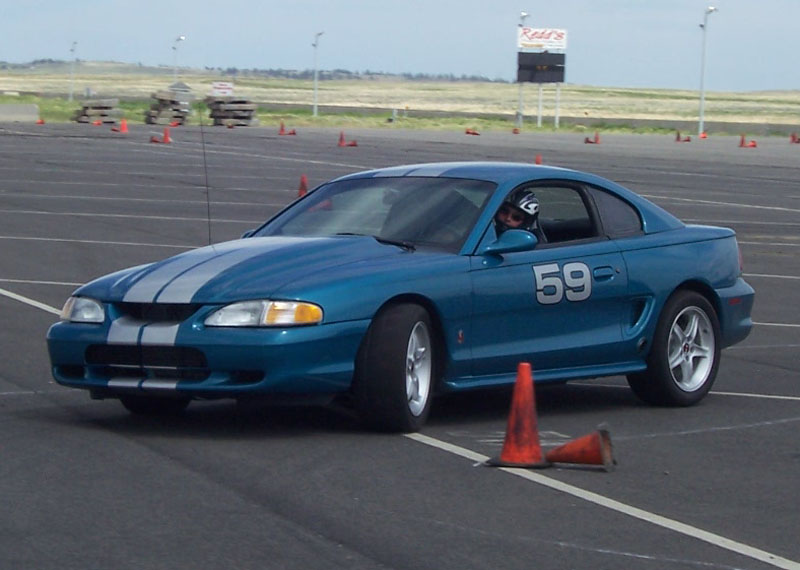