The facility, open 7 days a week, is approximately 15 miles NE of the Las Vegas Strip.  If you are staying on the Strip, it is best to use a limousine or Exotics Racing’s shuttle service rather than taking a cab.  If you will be racing more than one car, plan on being there for around 2 hours.  In the photo below looking east, the west grandstands of Las Vegas Motor Speedway are visible.

It was good my “team” was large because when they pooled their money, they were able to afford an “Extreme Driving Experience Package.” An Extreme Package allows you to choose from 14 different experiences which vary based on the number and type(s) of cars you select and how many laps you can drive.  The most seat time is 17 laps in a single-car package with a Mercedes SLS AMG, Aston Martin Vantage, Nissan GTR, or an Audi R8 V10.  At the opposite end of the spectrum, a three-car combo package includes 5 laps per car.  After much deliberation, I ultimately chose “Combo 3” which included a Ferrari 430F1, a Lamborghini Gallardo, and a Nissan GTR.  Each package includes classroom instruction, a “discovery lap” with a professional racing instructor in a Porsche Cayenne GTS, and your own racing experience with an in-car professional instructor.  For an additional charge, you can receive an on-board video of your driving experience including telemetry.

One by one, other cars began to appear.  Most drivers took a few warm-up laps around the track, and the sound was incredible.Â  Soon the tented paddock was filled with exotic cars of every color and configuration. Patrons were allowed full access to the cars for picture taking, sitting in, and just plain drooling over.

Promptly at 9:45 a.m., the classroom instruction began with a brief, yet thorough, introduction for drivers and guests as to what to expect and how to get the most out of the cars.  A diagram of the proper racing line was explained and information provided regarding the marking of braking points, turn-in points, apex points, and turn-out points.  The drivers were of all
ages and from as far away as Australia.  At the end of the classroom session, various enhancements were offered at discount rates to add laps or
vehicles; the two-for-one discount for additional laps is something I would highly recommend.  As the instructor predicted, it takes most of the 5-lap basic package to learn the course and the car.  The additional 2 or 4 laps allow you to really have fun and lower your lap times.

We then got in small groups to take our “discovery lap” in a Porsche Cayenne where the instructor reinforced what we had just learned in the classroom about the proper driving line and the various cones marking braking points, apexes, etc.

After returning from our discovery lap, we were herded back into the building for helmets and assignment to the instructor for the cars we had chosen.  It was recommended that we choose the “half helmets” if we were taller or driving small-cockpit cars such as the Lamborghinis.

I had decided to first drive the Ferrari F430F1, the least powerful of the three Ferrraris offered by Exotics Racing with a 4.3L V8 and 490hp at 8,500 rpm.  MSRP is approximately $220,000. The next step up is the F430 Scuderia which is rated at 510hp, and topping the list is the F458 Italia with a 4.5L V8 featuring 560hp. The Scuderia and the F458 both have MSRPs of approximately $300,000.  It didn’t take too long to settle into the Ferrari and learn the location of the important controls. All cars at Exotics Racing are automatics that can be operated either by paddle shifters or as fully automatic.  Take it from me, the paddle shifters are great.  No clutches to engage or revs to match–just shift up or down.
After a little light banter with the instructor, I engaged first gear and headed out of the pits.

In the classroom session, we were told not to look at the speedometer, tach, or anything else on the dash–we were to focus on where we were supposed to go.  We were to shift by “sound” or at the direction of the instructor.  Drivers proceed to the entry point of the track and await the instructor’s signal to go.  I had never used a paddle shifter before, but I got used to them pretty quickly.  The only time I messed up was when I attempted to downshift the Nissan GTR by pulling in on the turn signal lever at the end of the main straight.  (Note the video
cameras mounted adjacent to the rear-view mirror in the photo below.)

The F430F1 has a curb weight of 3,197 pounds, just a bit more than my Z06.  The mid-engine car was well balanced and went wherever I pointed it without protest.  The brakes were incredible, but the instructors got a little edgy if you blew past the braking cones without starting your deceleration.  Even though they were not V-12s, the Ferraris had the sweetest sounding exhaust systems!  Taking the Ferrari first proved to be a good decision.  The instructor indicated that I could have gotten more speed out of the car, but I was shifting too early.  I told him my Z06 redline was quite a bit less than the Ferrari’s 8,500 rpm.

When I finished driving the Ferrari, I returned to the building to find the “Team Owner” who was putting my new digital camera through its paces.  Five race laps in a quarter-million dollar Ferrari had definitely “got my motor running” and immediately I was asked, “what car do you want to drive next?”  I had thought I would have to wait in line until
other cars were freed up, but that was not the case.  I decided to relax a bit and have a drink of water while throttling back the adrenaline.

Driving the Lamborghini was fantastic.  It is the same weight as the Ferrari, but has 60 more hp and the sound of the V10 was not as loud as the Ferrari, but sweeter.  I set my fastest lap times of the three cars in the Lamborghini which gave me the impression it would do anything I asked it to do–again, without complaint of any kind.  It was completely comfortable to add steering or acceleration at any point through a corner as the car was very predictable and stable.  (No wonder Justin Bieber drives a Gallardo!) It was with great reluctance that I parked the Lambo and turned off the ignition.

The last car I drove was the Nissan GT-R “Godzilla.” The AWD 3.8L Twin-Turbo V6 530hp beast was a car I have wanted to drive for a long time.  The least expensive of the cars I had chosen (MSRP $115,000), I was certain it would deliver nonetheless.  The other instructors had cautioned me that the Nissan was heavier and would have to be driven accordingly.  At 3,820 lbs, there was a noticeable difference, but the GT-R is no Crown Victoria.  At the end of the day, the Nissan beat my best lap time in the Ferrari, but to be fair, I should have taken the Ferrari out one more time to be sure.  The GT-R is a strong-pulling beast, but it has some body roll and it takes a little more effort to haul down; see photo of the front brakes after my runs.  No doubt about it, I still love the GT-R.

Not having much coin left in my pockets, instead I purchased a $99 ride-along “drifting experience” for her in a 505hp Z06. The Filipino driver, Rudy Ibanez, is currently a factory drift pilot in the US and Japan for Weld Racing.  She told him, “Go faster!” through the 90 mph drifts, and she told me, “I want to do that 100 more times!” when she emerged from 2 laps in the Vette.

How do you finish a day like that?  At In-and-Out Burger, of course!

Can’t wait until next time…….. 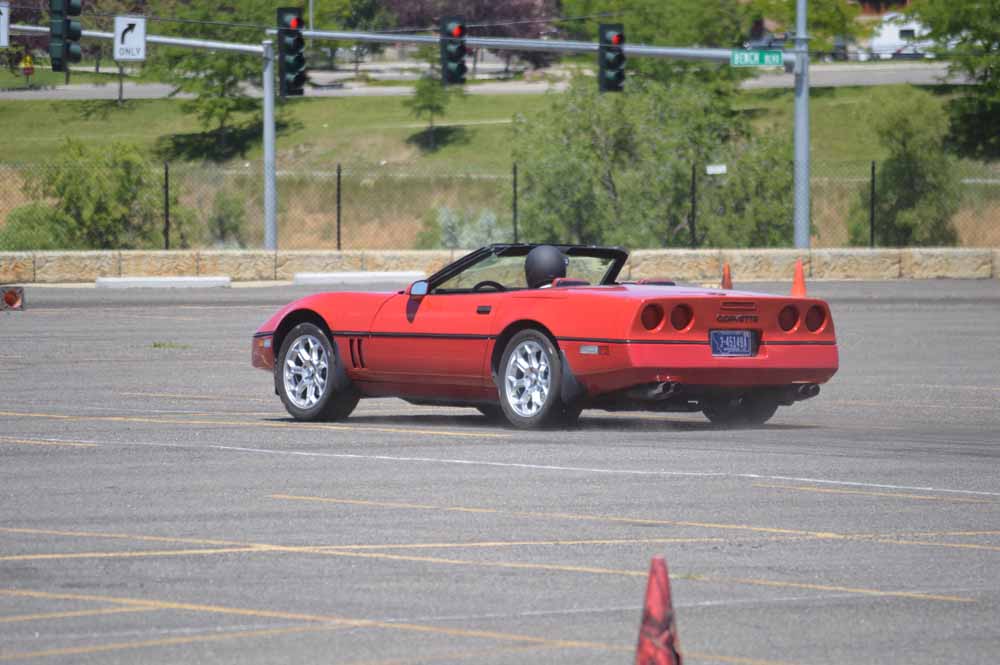