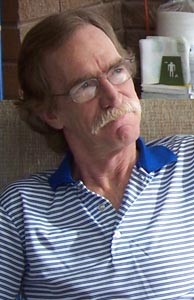 Dwight Gilliland passed away on February 21, 2014, at age 61, after a long battle with chronic health issues.  Godspeed, Dwight!

Below is Dwight’s YSCCA Profile while he was with us

My introduction to sports cars came when I was 4 or 5 years old, living in California. A college student who was renting a room from us would occasionally take me for a ride in his MG TD. Ten years later in Billings, MT, I was racing off-road in a dune buggy I had built. Two members of the local sports car club came to one of our off-road meetings to invite us to an autocross. Two weeks after that, I got my driver’s license, lowered my car, and took my first turn around a pylon. Life has not been “normal” since.
Another ten years and I was still autocrossing all over Montana, Wyoming, Idaho, and South Dakota in everything from a Bugeye Sprite to a Lamborghini. I was also road racing in cars ranging from a Caldwell Formula Ford to a McLaren-Matich Can-Am.

At that point, my sponsors and banks decided that I should try a different job and I couldn’t come up with a good counterargument. Still obsessed with speed, I went to work for other race teams. It has been my good fortune to work for teams running under various sanctioning bodies all over the world. I’ve done stints as a mechanic, crew chief, fabricator, and occasionally, driver.

My second attempt at building a dedicated autocross car resulted in the “Avenger.” The “Avenger” has taken me to two 4ths, a 5th, and a 10th at SCCA Solo Nationals, and resulted in a National Championship for my wife, Kristi. I also set new overall records at various events sanctioned by the Northwest Hillclimb Association.

>My thanks to our sport for a unique lifestyle and all the friends that have come with it.